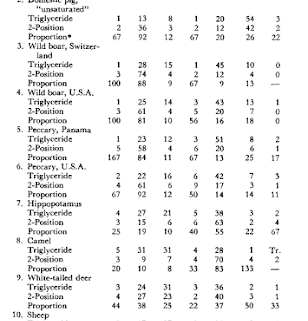 A friend recently drew my attention to an historical essay about a plan to bring hippos to the U.S. primarily for eating. Unfortunately, that plan never came to fruition. Hippos are one of the fatter animals left, endangered because their meat is so prized, and I wonder why we don’t just farm them.

In any case, I was curious about eating hippopotamus, and found an interesting section on hippopotamus fat in The Paleoanthropology and Archaeology of Big-Game Hunting: Protein, Fat, or Politics?.

William Burchell in 1822 provides a concise but useful description of hippo fat, noting its quantity and its somewhat unusually low melting point:

The ribs [of the hippo] are covered with a thick layer of fat, celebrated as the greatest delicacy; and known to the colonists as a rarity by the name of `Zeekoe-spek’ (Seacow-pork). This can only be preserved by salting; as, on attempting to dry it in the sun in the same manner as other parts of the animal, it melts away. The rest of the flesh consists entirely of lean; and was, as usual with all other game, cut into large slices, and dried on the bushes; reserving only enough for present use.

Schweinfurth’s (1978) interesting narrative provides additional insights into the amount of fat that one can obtain from a single hippo carcass; he also comments on the low melting point of the fat, noting additionally that the fat does not go rancid easily:

We were hard at work on the following day in turning the huge carcass of the hippopotamus to account for our domestic use. My people boiled down great flasks of the fat which they took from the layers between the ribs, but what the entire produce of grease would have been I was unable to determine, as hundreds of natives had already cut off and appropriated pieces of the flesh. When it is boiled, hippopotamus fat is very similar to pork-lard, though in the warm climate of Central Africa it never attains a consistency firmer than that of oil. Of all animal fats it appears to be the purest, and at any rate never becomes rancid, and will keep for many years without requiring any special process of clarifying….

I eventually found a paper which gives the composition of the fat of a variety of even-toed (cloven-hoofed) animals. I was perplexed, because hippo fat appears to be almost the same as beef, and although it has a little more oleic acid and a little less stearic [*], which should make it slightly less solid than beef tallow, it should still be firmer than lard, which has even more oleic and less stearic.

Hope temporarily returned when I realised what the point of the paper was, and I learned something new to me. Fat is usually in the form of a triglyceride. It’s called that because it consists of three fatty acids held together by a glycerol “backbone”. The thing I hadn’t read about or thought about before, is that the properties of triglycerides depend not just on which fatty acids are in them, but what position they are in the triglyceride. There appears to be a whole industry built around that. For example, now that consumers avoid hydrogenated oils, but still think they should avoid saturated fat, and still want something spreadable, engineers have discovered they can make vegetable oils more solid by manipulating the position of fatty acids within triglycerides [†].

Nonetheless, looking at the table in the paper [‡], not only is the proportion fatty acids in hippo fat similar to beef, so is the distribution of those fats into the middle position of the triglyceride. So, the mystery isn’t solved that way. I don’t know what to think.

Another friend pointed out that there are feral hippos in Columbia that no one knows what to do with. I have an idea…

Here is a fascinating review of the effects of these ‘interesterification’ manipulations:
Effects of stereospecific positioning of fatty acids in triacylglycerol structures in native and randomized fats: a review of their nutritional implications
Tilakavati Karupaiah1 and Kalyana Sundramcorresponding author
Nutr Metab (Lond). 2007; 4: 16. For more tables of the composition of fats and their second-position fatty acids in a variety plants and animals, see: TRIACYLGLYCEROLS PART 1. STRUCTURE AND COMPOSITION