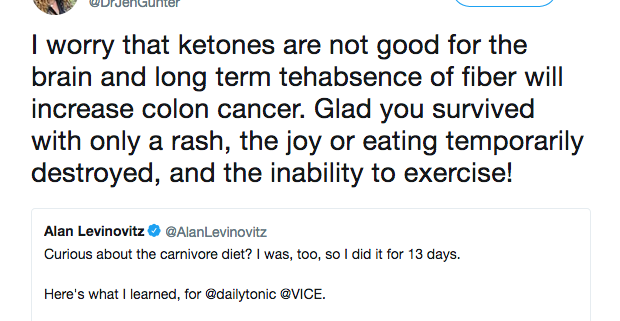 Alan Levinovitz is an author and scholar of religious studies who has written about diet and science. He recently wrote an article criticising the carnivore diet: The Carnivore Diet Is the Latest Fad to Ignore That Food Does More Than Just Feed Us. It is this article that got me talking with Alan on Twitter about his suggestion in the article that the anecdotal effects are psychological. I was delighted that he took me up on a long form debate about this, and have posted that separately. I admire and applaud Alan for his cordial manner on social media, which is a precious rarity.

Here I want to object to a couple of points in his article that have to do with keto-adaptation, not carnivory in particular, and not the whole muddy question of potential disease modification. I absolutely agree with his cautions that we need more study, that proposed mechanisms are routinely falsified, and that the baseline Western diet combined with a wretched medical system incentivises junk science cures. However, I don’t see how his 13-day trial sheds light on the biology, and I think he should have done just a little more research.

His article doesn’t stand alone. It is consistent with prevalent and justified attitudes that nutritional science is mostly bunk. Unfortunately, this often results in a base level of hostility and refusal to even consider a scientific perspective on a topic viewed with suspicion. This is exemplified by a Twitter interaction I had in which someone tweeted Alan Levinovitz’s article, saying that she was worried about the effects of ketosis on the brain. I was eager to share some of my research, because if there is anything the science shows, it’s that ketosis is healthy for the brain! Fetuses and breastfed babies are in mild ketosis during brain growth, neurological diseases and cognitive decline are sometimes reversed by ketosis. It is our brains that probably account for the fact that we alone as species can stay in ketosis without caloric or protein restriction. When I invited her to read my presentation on this from earlier this year, she acted as if I were a salesperson approaching her on the street. “Not interested. Have a nice day.” It turns out that ketogenic diets are drastically different from other diets, because they directly affect metabolism. As I’ve explained in one of my first posts on the topic, ketogenic diets are recognized as being at least as powerful as drugs in at least two major clinical condition, and there is reason to believe they are useful against others. In the noise of weak dietary therapies, it’s harder to see a signal. This difference, though, doesn’t happen all at once. Keto-adaptation accounts for the two phenomena Alan described that I want to address.

Since we’re already on a tangent looking at that tweet, let’s just talk about colon cancer and fibre for a moment. I won’t delve into it deeply here. You can read my article about the misapplication of science about butyrate from plant fibre to colon health, if you’re interested in that angle. Note also, though, that associations between fibre intake and colorectal cancers, which is confounded by the healthy user profile among other things, show minimally reduced relative risk—far above 0.33 [Mur2012]which is considered by some a minimal threshold for even suspecting causation (see e.g. [War2012]). It is understandable to “worry” about colon cancer, given the hype about it, but you would think that someone in the medical profession would want to dig a little deeper and not just parrot headlines. Alan explains his experience of losing 7 pounds while carnivorous, but gaining back 5 after resuming his high carb diet, as follows: “Those were the bullshit pounds that low-carb diets use to hook their marks, like a con man giving away the first jackpot in a street hustle… If you stop eating low-carb, or “zero-carb,” the early loss—up to 12 pounds!—returns instantly because it’s not fat you’ve lost, just water released as your body burns through its glycogen stores.”

Indeed, as I described in the second link above, much of the first few pounds lost when you stop stuffing your liver with carbs in the form of glycogen are from water required to store it. You lose carb weight before your fat loss will accelerate on a ketogenic diet. Your body disposes of excess carbs before excess fat just as it does in the bloodstream when your blood sugar is sufficiently high. However, that hardly impacts the fact that you lose excess fat on a ketogenic diet. People like me, who have lost over 60 pounds, or others who have lost even more, did not lose just water, and it would be ludicrous to suggest that. Total weight lost will only be mostly water if you stick to the diet for a bullshit timeframe, like 13 days. This isn’t just a quick-fix, 13-day, fit-into-your-wedding-gown hack.

In any case, you could make the same argument about fat! Fat is stored with about equal parts water. When you lose a pound of fat, that’s actually half water [Mel1942], twice as much as what carbs are stored with. [Edit 2019-05-14 This is INCORRECT. I was conflating water stored with fat with water that results from the chemical breakdown of fat. My bad!] What a scam, right? Granted, Alan is right that it’s only carbs and the necessary water that pack back on so fast. Apparently he lost 2 fat pounds in 2 weeks not counting the glycogen-water, presumably eating as much as he liked, and he doesn’t appear to be particularly overweight, so one wouldn’t expect more true loss than that, especially in such a short time frame.

I think this criticism is only fair if you’ve been misinformed about the diet in the first place. Understanding the basic physiology of how the diet works would seem to me to be the onus of the dieter. Writers advocating the diet tend to clarify this. For example, in the most recent Atkins Diet book from Westman, Phinney, and Volek: “As with any weight loss program, some of the initial weight loss you’ll experience is water weight… So if you drop 10-15 pounds in the first few weeks, you’ll be saying good-bye to some unnecessary water weight along with the initial fat pounds. But once that excess water is gone, you’ll be losing primarily body fat.” From yours truly: “Another noticeable effect in the first days is water loss. One of the inefficiencies of glycogen storage is that it needs to be stored with water. It takes about 3 or 4 grams of water to store a gram of glycogen [ref] . This means that as you deplete your glycogen stores you could lose up to 2 kg of water! Not only that, but high circulating insulin levels cause water retention by inhibiting sodium excretion (see e.g. [ref]). The keto diet lowers insulin levels and increases insulin sensitivity, allowing excess fluid to be released. These combined effects are the origin of the claim that the weight lost on keto diets is due to water loss. In the very beginning, this is true, but subsequently, of course, it is not.” Where is the hustling here?

Alan suffered from keto-adaptation, and though he appeared to know about it, citing Phinney, he still complained about his athletic performance, which is known to take 4-6 weeks to resolve in professional athletes. He didn’t plan to do the diet for that length of time, so it seems disingenuous to bring this up as an issue.

Give it more time and have a good reason

As I’ve outlined in my post about how to try a carnivorous diet (Eat meat. Not too little. Mostly Fat), It takes about 30 days to see appreciable differences from this diet (and often more), compared to a merely ketogenic one. Those differences are really only possible if you’ve tried a ketogenic diet and didn’t get everything you hoped for, and if those hopes were within certain categories none of which seem to apply to Alan. I don’t advocate eating a carnivorous diet for no reason at all, and even the “unparalleled fuck you” Alan describes is only fun for a little while compared to the fun you could be having by eating whatever you please. It speaks to the power of the intervention that any of us are doing this more than 13 days at all.

“The utilization by the body of ingested food substances and of tissue reserves yields among other things quantities of metabolic water. As the complete combustion of 100 gm. of fat produces about 110 gm. of metabolic water, whereas 100 gm. of carbohydrate yields only 55 gm. of water, fat reserves and fatty foods are believed to be particularly valuable as a protection against desiccation. This contention would appear to be supported by the fact that many animals which exist in deserts have large reserves of fat.”

“After a mean follow-up of 11.0 years, 4,517 incident cases of colorectal cancer were documented. Total, cereal, fruit, and vegetable fibre intakes were estimated from dietary questionnaires at baseline. Hazard ratios (HRs) and 95% confidence intervals (CIs) were estimated using Cox proportional hazards models stratified by age, sex, and centre, and adjusted for total energy intake, body mass index, physical activity, smoking, education, menopausal status, hormone replacement therapy, oral contraceptive use, and intakes of alcohol, folate, red and processed meats, and calcium. After multivariable adjustments, total dietary fibre was inversely associated with colorectal cancer (HR per 10 g/day increase in fibre 0.87, 95% CI: 0.79–0.96). Similar linear associations were observed for colon and rectal cancers. The association between total dietary fibre and risk of colorectal cancer risk did not differ by age, sex, or anthropometric, lifestyle, and dietary variables. Fibre from cereals and fibre from fruit and vegetables were similarly associated with colon cancer; but for rectal cancer, the inverse association was only evident for fibre from cereals.”

An Open Dialogue with Alan Levinovitz on Miracle Cures