Cardiovascular disease (CVD) is the leading cause of death worldwide
1. Because of its prevalence and life-threatening nature, and because it appears that a keto diet is likely to reverse it, we consider it one of the most important conditions to discuss here.

In our last post, we argued that CVD, being a disease strongly associated with metabolic syndrome, is likely to be best treated with a ketogenic diet. In this post we will present more evidence that ketogenic diets do improve heart disease risk factors.

Unfortunately, there is much confusion and misinformation about the impact of nutrition on CVD among scientists and non-scientists alike. Not only does a high fat, keto diet not worsen heart disease risk — as would commonly be assumed — it actually improves it. This confusion about dietary fat is probably the reason that we do not yet have clinical trials directly testing the effects of ketogenic diets on CVD outcomes.

However, we already have many trials of ketogenic diets that measured known CVD risk factors, especially cholesterol profiles. It turns out that these trials show a powerful heart disease risk reduction in those following a ketogenic diet. It is powerful both in absolute terms, and in comparison with low-fat diets, which tend to improve some weakly predictive factors while worsening stronger predictors.

As such, a high-fat ketogenic diet is currently the best known non-drug intervention for heart disease, as defined by mainstream measures of risk. It is arguably better than drug interventions, too.

The connection between blood cholesterol levels and the development of heart disease began to be explored in the last century. Over the last several decades, our understanding of the predictive power of various blood lipids has gone through many refinements as our ability to measure finer and finer detail has advanced.

In the early years, it appeared that high levels of total cholesterol carried some risk of heart disease in many cases. However, it is now well established that total cholesterol by itself is a weak predictor 2, 3, 4.

The reason is quite simple. The different subtypes of cholesterol work together in an intricately balanced system. There is a wide range of total cholesterol levels that are perfectly healthy, so long as the proportions of the subtypes are healthy ones. By the same token, a given level of total cholesterol, even if it is perfectly normal, could be pathological when examined by subtype. Strong evidence from recent decades suggests that the best known blood lipid measures for predicting future risk of CVD are HDL, triglycerides, and related ratios (see below).

Similarly, while LDL cholesterol is probably important, it appears that it does not have good predictive power when looking at its magnitude alone 5, 6, 7, 8.

One reason for this is that like total cholesterol, LDL is not uniform. Just as we distinguish between HDL and LDL, the so-called “good” and “bad” cholesterol, LDL itself is now known to have two important subtypes with opposite risk implications. Having more large, light LDL particles (also called Pattern A), does not indicate high CVD risk, but having more small, dense particles (Pattern B) does 9, 10, 11, 12, 13. Therefore high LDL by itself is not necessarily indicative of CVD.

This is consistent with many other studies, for example this very recent analysis from the COURAGE trial 15.

In both cases, however, it doesn’t matter in which way the controversy is resolved! Whether or not triglycerides independently predict CVD (and there is at least some evidence that they do), and whether or not they cause CVD, there is no controversy about whether they predict CVD. The association between triglyceride levels and CVD still holds and is strongly predictive 16, 17, 18. In fact it is so predictive that those who argue that triglyceride levels are not an independent risk factor, call it instead a “biomarker” for CVD 19. In other words, seeing high triglycerides is tantamount to seeing the progression of heart disease.

Triglycerides and HDL levels statistically interact. That means it is a mistake to treat one as redundant with respect to the other. If you do, you will miss the fact that the effect of one on your outcome of interest changes depending on the value of the other. Despite the fact that most heart disease researchers who study risk factors have not used methods tuned to find interactions between triglycerides and HDL, many studies have at least measured both. This has allowed others to do the appropriate analysis. When triglycerides and HDL have been examined with respect to each other, that is, when the effect of triglycerides is measured under the condition of low HDL, or when the effect of HDL is measured under the condition of high triglycerides, this combination of factors turns out to be even more indicative of CVD 20, 21, 22, 23.

One of the most interesting aspects of this finding from our perspective, is that the ratio of triglyceride levels to HDL is considered to be a surrogate marker of insulin resistance (See The Ketogenic Diet as a Treatment for Metabolic Syndrome.) In other words, the best lipid predictors of CVD are also those that indicate insulin resistance.

There is now ample evidence that a low carbohydrate, ketogenic diet improves lipid profiles, particularly with respect to the risk factors outlined above: triglycerides, HDL, and their ratio 24, 25, 26, 27, 28, 29, 30, 31.

Although a ketogenic diet typically raises LDL levels, which has been traditionally seen as a risk factor, it has also been shown to improve LDL particle size. In other words, although the absolute amount of LDL goes up, it is the “good” LDL that goes up, whereas the “bad” LDL goes down 31, 32. This is hardly surprising, since LDL particle size is also strongly predicted by triglycerides 33, 34, 35.

Although there have not yet been intervention studies testing the effect of a ketogenic diet on the rate of actual CVD incidents (e.g. heart attacks), the evidence about lipid profiles is strong enough to make ketogenic diets more likely to reduce heart disease than any other known intervention. 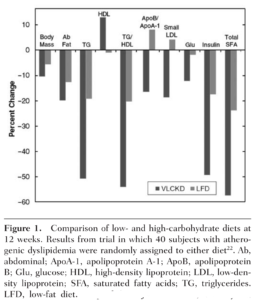 It makes an excellent visualization of the factors at stake, and how powerful a ketogenic diet is. It also shows quite clearly that not only is restricting carbohydrate more effective for this purpose than a low fat diet, but that a low fat diet is detrimental for some important risk factors — apolipoprotein ratios, LDL particle size, and HDL — but a low carb diet is not. The ketogenic diet resulted in a significant improvement in every measure.

Despite a strong and consistent association within populations, elevated TC [(total cholesterol)] alone is not a useful test to discriminate between individuals who will have CHD [(coronary heart disease)] events and those who will not.

Those individuals who had TC [(total cholesterol)] levels of 150-300 mg/dl (3.9-7.8 mmol/1) fell into the overlapping area (Fig. 1), demonstrating that 90% of the TC levels measured were useless (by themselves) for predicting risk of CHD [(coronary heart disease)] in a general population. Indeed, twice as many individuals who had a lifetime TC level of less than 200 mg/dl (5.2 mmol/1) had CHD compared with those who had a TC level greater than 300 mg/dl (7.8 mmol/l) (Fig. 1).

The ranges of serum cholesterol and LDL cholesterol levels varied widely both in the general population and in patients who had already manifested CAD (Figures 1 and 2). Because of the extensive overlap between levels, it was impossible to differentiate the patients with CAD from the control subjects.

For over three decades it has been recognized that a high level of total blood cholesterol, particularly in the form of LDL cholesterol (LDL-C), is a major risk factor for developing coronary heart disease (CHD) [1–4]. However, as more recent research has expanded our understanding of lipoprotein function and metabolism, it has become apparent that LDL-C is not the only lipoprotein species involved in atherogenesis. A considerable proportion of patients with atherosclerotic disease have levels of LDL-C and total cholesterol (TC) within the recommended range [5, 6], and some patients who achieve significant LDL-C reduction with lipid-lowering therapy still develop CHD [7].

Other lipid parameters are also associated with elevated cardiovascular risk, and it has been suggested that LDL-C and TC may not be the best discriminants for the presence of coronary artery disease (CAD) [5].

Using different analytical methods, up to 12 low-density lipoprotein (LDL) subfractions can be separated. LDL particle size decreases with increasing density. Smaller, denser LDL particles seem more atherogenic than the larger, lighter particles, based on the experimental findings that smaller LDL particles are more susceptible for oxidation in vitro, have lower binding affinity for the LDL receptors and lower catabolic rate, have a higher concentration of polyunsaturated fatty acids, and potentially interact more easily with proteoglycans of the arterial wall. Clinical studies have shown that a smaller LDL subfraction profile is associated with an increased risk of heart disease, even when total cholesterol level is only slightly raised. There is a strong inverse association between LDL particle size and triglyceride concentrations. Although LDL particle size is genetically determined, its phenotypic expression may also be affected by environmental factors such as drugs, diet, obesity, exercise or disease. Factors that shift the LDL subfractions profile towards larger particles may reduce the risk of heart disease.

The Ketogenic Diet as a Treatment for Metabolic Syndrome

Similarities between germ-free mice and ketogenic humans
Scroll to top