One of the cheapest and easiest ways to measure ketones is to use ketone test strips, e.g. Ketostix. Ketone test strips use a chemical reaction to measure acetoacetate (see below), usually in urine, though the same method can be used for blood. (Not to be confused with the blood strips used at home for beta-hydroxybutyrate.) However, acetoacetate test strips are of limited usefulness. For one thing, urine concentrations are affected by dilution, which means that they are affected by how much you drink.But the problem is deeper than that. Acetoacetate is only one of the three ketone bodies (see below). Initially, when you start a ketogenic diet, acetoacetate will make up about half of the circulating ketones [1], but when you are keto-adapted, it makes up only about 20% of the ketone bodies in circulation (see below). Moreover, the sensitivity of the strips is a little lower than optimal for our purposes. They register negative unless the concentration is quite high.

So, it is not uncommon for a keto-adapted person to measure negative for acetoacetate.

The level of ketosis in fasting and in epileptic treatment is a little bit higher than for the typical ketogenic dieter who is simply trying to lose weight, enhance athletic performance, or improve their cardiovascular risk profile, for example. In those cases, beta-hydroxybutyrate levels are typically 1–3 mmol/L.

Here are some examples of negative acetoacetate, even while beta-hydroxybutyrate is very high.

Most of the cases of high beta-hydroxybutyrate in this study were not also positive for urine acetoacetate.

This flowchart shows that it is clinically accepted that even with very high beta-hydroxybutyrate levels, acetoacetate in urine and blood can be negative.The reason acetoacetate is bothered with at all is that it is relatively cheap and easy to measure.

Ketone test strips are a cheap and easy way to confirm ketosis when you have very high levels, such as during keto-adaptation. However, we would expect the false negative rate to be high for keto-adapted people, and for infants, (who are normally in consistent but mild ketosis while exclusively breastfed). So although it can be a good tool when you are starting a ketogenic diet, it is not necessarily reliable as you progress.

A negative acetoacetate measure does not imply that you are not in ketosis.

If you are troubleshooting, and need more accurate measurements, we strongly recommend a blood ketone meter for beta-hydroxybutyrate. However, be aware that the strips themselves are very expensive.

A new breath acetone meter is now on the market. It costs about $100, but it doesn’t require any strips, so you pay only once. Unfortunately, like the acetoacetate strips, the measure is only semi-quantitative, and appears to have a relatively high minimum threshold for showing positive. We also don’t know how well acetone correlates to beta-hydroxybutyrate, or to therapeutic results. Nonetheless, it is a promising technology, and it requires no pinpricks or pants down. We’d love to hear from you if you’ve given it a try.

“Whenever a defect in carbohydrate metabolism or absorption or an inadequate amount of carbohydrate is present in the diet, the body compensates by metabolizing increasing amounts of fatty acids. […] In ketonuria, the three ketone bodies present in the urine are acetoacetic acid (20%), acetone (2%), and 3-hydroxybutyrate (about 78%).”

“One hundred forty-five children with intractable epilepsy were randomized to receive a classical or an MCT diet.”

“Classical diets were started at a 2:1 ratio and gradually increased to a 4:1 ratio as tolerated over 1–2 weeks; in a few children the ratio was kept at 3:1 for longer because of tolerance problems. Protein was generally kept at World Health Organization (WHO) minimum requirements for age (World Health Organization, 1985). MCT diets were commenced on a full prescription for carbohydrate (generally 15% energy), protein (usually 10% energy), and long-chain fatty acids (usually 30% energy). The MCT fat was increased incrementally over a 7–10 day period as tolerated, to an initial level that was usually 40–45% of total dietary energy. Diets were fully supplemented with vitamins and minerals.

“Subsequent to starting the diet, all children were reviewed as outpatients at 3, 6, and 12 months. They were also closely monitored by telephone between clinic visits. Diets were fine-tuned as necessary to improve ketosis and optimize seizure control. The parameters within which the two diets could be modified were defined before study commencement. Overall energy prescription was adjusted on both diets as needed. Ketogenic ratio on the classical diets was kept between 2:1 and 5:1 (most classical diet children were on a 4:1 ratio, a few were on a 3:1 ratio, and two children needed a 2:1 ratio for a short period). Fine-tuning on the MCT diets involved adjusting the proportion of MCT and carbohydrate in the prescription. MCT was usually started at 40–45% of energy, and was increased up to 60% if necessary and tolerated. Carbohydrate was usually started at 15% of energy, and was reduced to a lowest value of 12% if necessary. Carbohydrate was reduced to improve ketosis only if an increase in MCT was not possible because of poor tolerance. Other modifications on both diets were fluid intake and meal distribution. Protein intake was increased as needed to meet requirements.” 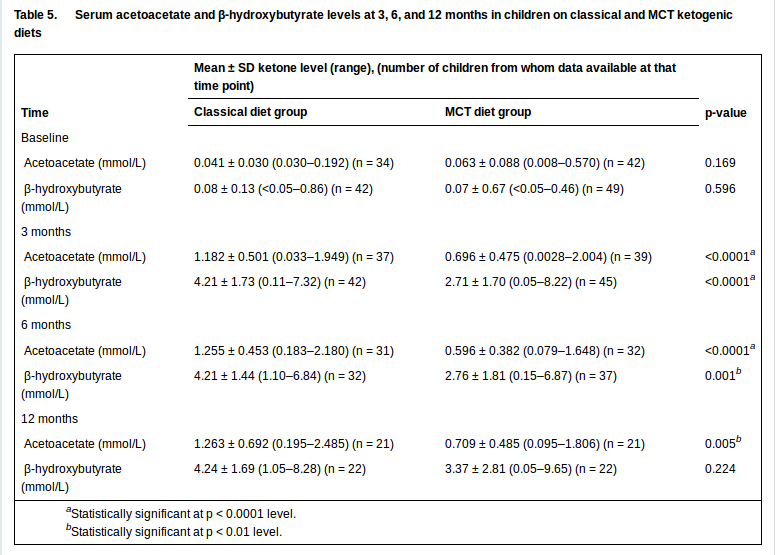 Here is an example of each:

“Nitroprusside is available as a test tablet (Acetest) and as a coated reagent strip (Ketostix), both manufactured by the Ames Division of Miles Laboratories, Inc., Elkhart, Indiana. With Acetest, after 30 seconds the color development is compared to a chart and judged negative, small, moderate or large. The tablet will detect 5 to 10 mg/dl of acetoacetate and 20 mg/dl of acetone. The quantitative range included in each category is 5 to 20 mg/dl for small, 20 to 40 mg/dl for moderate, and 40 mg/dl or greater for large. With Ketostix, the strip is momentarily dipped into the urine specimen or passed through in the urinary stream and compared to a color chart 1 minute later. The scale is negative, trace, small, moderate, and large. The strip is capable of detecting 5 mg/dl acetoacetate but is not reactive to acetone. The ranges are wider and shifted somewhat to the right in the higher zones compared to Acetest so that only 16% of samples containing 20 mg/dl acetoacetate are read as moderate while 24% of samples containing 80 mg/dl acetoacetate are still called moderate. Only 15% of the samples containing 40 mg/dl acetoacetate are judged to be large; 76% are large at 80 mg/dl and 100% at 160 mg/dl. The Ketostix test is most accurate when urines are tested with a high specific gravity (between 1.010 and 1.020) and low-pH. Highly pigmented urine specimens may yield false positive readings. Levodopa will also cause a false positive result. Ketostix strips are less sensitive than Acetest tablets and have a high degree of variability between lots. Acetest, with sensitivity in the 5 mg/dl range, is the preferable method.”

“Urine (and blood) can be screened for ketones by using either reagent strips or tablets […] The [tablet] is more sensitive than reagent strips and will detect 5 mg/dL of ketones compared with 10 mg/dL for dipsticks.”

“MacGillivray et al. recently reported that 57% of the urine tests that were negative for ketone bodies by acetest were associated with elevated plasma 3-OHBA in insulin-dependent diabetes.

Dangerous Mistakes of Reading the Internet Scroll to top