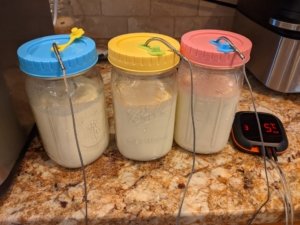 I started making more homemade yoghurt recently, and I found some methods I wanted to share.

I wanted to make my own for two main reasons: I wanted it to contain VSL3 (see EDIT!), (a powerful probiotic often used for treating c diff), and I wanted it to be fully or mostly heavy cream. It's also less expensive per batch to buy the ingredients and do it at home than to buy yoghurt, but since I'm using some pricy equipment, it's not a clear win in that respect, depending on what else the equipment is used for and how many batches are made.

Microbiome researcher Matthew Dalby (whose blog I recommend) suggested I not add VLS3 for the fermentation step as it may not fare well, and would be expensive to waste.

I'd add the VSL3 once it's in the fridge or just before eating. Two of the eight probiotic species of bacteria in VSL3 are yogurt bacteria and should grow well but they will be in live yogurt already. Some of the others in VSL3 are unlikely to do well in fermenting milk.

As a bonus, the method I settled on makes it easy to enhance the yoghurt with stearic acid, which some might be interested in given recent work from Brad Marshall (and the croissant diet), building on ideas from Peter "Hyperlipid" Dobromylskyj.

Or skip to Instructions.

The general steps in making yoghurt are:

The pasteurisation step is where you bring the milk/cream to a high enough temperature to kill anything already alive in it. This ensures that what you grow in the growing step is only what you want to be growing. I haven't always bothered with this previously, in part because the cream I buy is already pasteurised, but right now I'm feeling the need to be more careful.

The first few times I did this, I did the pasteurisation step on the stovetop. This is the most time consuming part, because you have to monitor it and stir it frequently to keep it from sticking to the bottom, burning, or boiling over. It takes a while.

After pasteurisation you now have to bring it back down to a temperature optimal for growing the bacteria you want. Then you can add the cultures, and then you simply keep it at a temperature that promotes growth for long enough to get the desired properties.

Because I was making large batches, I decided to do the growing step sous vide in quart mason jars. The process was fussy, because I had to pasteurise the cream, sterilise the jars, cool the cream by submerging the pot in an ice bath, stir in the cultures, pour into the individual jars, and then, finally turn it over to the sous vide to maintain temperature. After a few iterations, it suddenly occurred to me that I could do the pasteurisation step sous vide, too, thus saving a lot of time and fuss.

It turns out that pasteurising can be done hotter and faster or lower and slower. So you don't have to have the cream at a boil in your mason jars. You can simply get it to about 63°C (145°F) and hold it for half an hour.

It was at this point in thinking through the process that I realised I could melt stearic acid into the cream at the same step. Stearic acid melts at about 70°C, so I just pasteurised at that temperature. I used cocoa butter, not pure stearic, but I'm sure either works. This gave a kind of "essence of chocolate" flavour.

The sous vide makes it easy to maintain temperatures of the bath itself but it doesn't tell you the exact temperature of the bottle contents. In order ensure the pasteurisation, and more importantly, to ensure the cream is cool enough not to kill the cultures you're adding, I decided to get a set of wireless probes designed for meat on the grill and jar lids with holes designed for straws.

So here's the whole process: 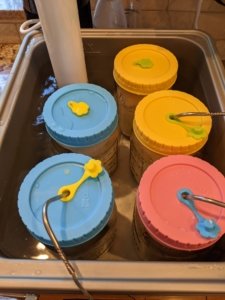 A thin film of fat at the top (most stays emulsified) 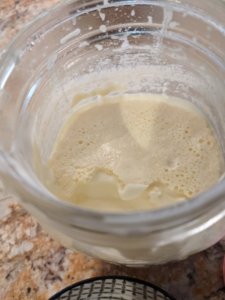 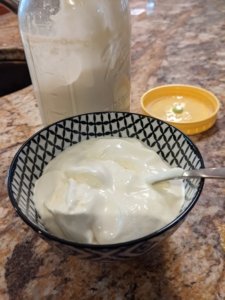 What can COVID-19 teach us about metabolic syndrome?

Keto-adapted but no (low) ketones? Part II
Scroll to top