One of the projects I'm working on now that I'm most excited about involves studying sleep neuroscience, and the interactions between sleep, diet, and health. Before finding the carnivore diet, which has consumed the lion's share of my research motivation since its therapeutic effects caught me by surprise, I was studying sleep avidly, because it intersected two strong interests at the time. I had been pursuing polyphasic sleep, in which I was trying to maximise sleep efficiency by sleeping for short periods, but frequently. And I was also tantalised by the research showing that sleep deprivation could cure depression — but only so long as it could be maintained. I felt sure that these two ideas could be powerfully combined. However, as my attempts at hard-core polyphasic sleep schedules had failed, and as my own depression was eliminated unexpectedly through diet, my attention was temporarily diverted.

Recently, I returned to the topic of sleep in full force. I registered for a graduate course on sleep physiology at CU Boulder to get immersed in the core background knowledge, and I committed to a journal submission deadline to write a review about sleep and ketogenic diets, which, regardless of publication outcome, will form the basis of two upcoming conference presentations.

As part of my class, we were asked to critique a written media piece on sleep, so naturally I chose the best piece I could find on sleep and ketogenic diets. It was from Psychology Today: The Science Behind the Ketogenic Diet and Sleep, written by Michael Breus, a clinical psychologist who is a sleep expert and has a website on sleep science. I thought it would be fun to share my critique here. While the article contains some defensible ideas, it also has some objectionable ones. Let's take it one idea at a time.

Breus opens with the claims that:

I have certainly heard some people complain of insomnia on ketogenic diets, but I've also frequently heard reports of sleep improvement. While it's subject to sampling pitfalls, survivorship bias, etc, I did a brief, informal survey on Twitter about this, just to get a sense of whether my impression that improved sleep was more common than disturbed sleep had any basis. Here were the results. 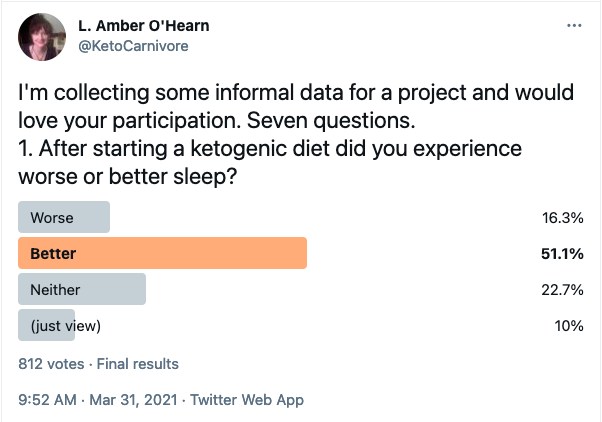 At least in this sample of 731 (those who didn't click "just view"), more than half reported improved sleep, three times as many as those who reported worse sleep. I have theories about both phenomena to explain in detail later. For now I just want to note that this framing, that ketogenic diets might cause sleep disturbances, may actually be emphasising the less common response. So we should take that into account when looking at attempts to explain it.

As to sleep changes in response to macronutrients, that is quite true, but there are important nuances and caveats to those results. For a diet to be ketogenic it typically must adhere to certain macronutrient ranges, but their specific combination induces a specific metabolic state that can have very different effects from similar macronutrient changes in a non-ketogenic context.

Since few studies have directly evaluated the relationship of ketogenic diets to sleep, it is understandable that Breus draws from many indirect studies on macronutrient effects, and only three involving actual ketogenic diets, (although there are certainly more than three).

The ways we could evaluate effects on sleep include duration and efficiency, but also "architectural" changes — changes to the pattern of sleep stages. There are several different sleep stages, but the primary distinction that is made is between REM sleep (named for the characteristic Rapid Eye Movement), most associated with dreaming, and NREM (non-REM) which features "deep" or slow-wave sleep (SWS). Both are important.

In discussing direct studies of ketogenic diets that measured sleep parameters, Breus implicitly suggests that most evidence points to ketogenic diets increasing REM. While the examples used did show increased REM, they were in the context of abnormally reduced REM. It would be more accurate to say that a ketogenic diet can restore REM in those with REM deficits due to obesity in the former example ([Wil1998]), or epilepsy in the latter ([Hal2007]). Absent underlying disturbances, multiple lines of evidence show increased NREM and decreased REM are more likely outcomes. This includes studies of fasting (itself ketogenic) [Mac1973], [Des1991], of those losing weight [Lac1975], and from injecting acetoacetate in animals [Chi2014], as well as the association of high carbohydrate intake with increased REM [Phi1975], [Por1981]. I will discuss this more extensively in the upcoming paper.

High fat diets that aren't low in carbohydrates often show worsening metabolic health markers in a way that is precisely the opposite of what happens when fat is high in the absence of carbohydrates. So we need to be cautious is extrapolating from them.

Breus rightly points out that high fat diets have mixed results on sleep quality. The study he gives to support that in turn cites several showing an improvement in sleep quality, and several showing the reverse [Lin2016]. It seems quite clear that "high fat" by itself is an underspecified factor.

Breus brings up carbohydrates as sleep promoting via increasing tryptophan, a precursor to serotonin, which is in turn the precursor to melatonin. While a reference was not given, for the elevation of tryptophan and serotonin from carbohydrate intake, this effect is long known. Spring attributes it to an indirect effect of insulin that reduces competition with tryptophan in crossing the blood-brain-barrier [Spr1984]. Serotonin is an interesting neurotransmitter. While it's true that it is the precursor to melatonin, it's also in the class of "stimulating, alerting brain chemicals" that are contrasted with it later. Moreover, melatonin itself does not increase sleep quality (except daytime sleep in shift work), although it decreases the time it takes to get to sleep. So it's not immediately obvious that carbohydrates would increase sleep duration as implied.

Nonethless, other studies have indeed shown an increase in sleep duration [Zam1995], or decrease in latency with carbohydrate intake [Afa2007], though the mechanisms may have more to do with metabolism than trypotophan per se, since others have shown that the duration of subsequent sleep correlates simply with the amount of energy derived from the previous meal [Pen2007].

Breus states that a factor that "clearly" matters is carbohydrate quality. The only evidence given for that was an observational study on insomnia in the elderly [Jau2011], which stated that in women, but not in men, the diet having characteristics of the Mediterranean diet, which was defined as

was "marginally protective" for difficulty maintaining sleep, and not associated with early morning awakening. Given the tenuous results connected to a description that only in very small part corresponded to carbohydrate quality, I don't see this as "clearly mattering" at all.

Breus reports mixed results in high protein diets, and since none of the studies isolated the ketogenic condition, and moreover ketogenic diets aren't necessarily even high in protein, we won't consider this aspect further here.

The connection to adenosine is one of the most interesting to me personally and is one of the reasons I turned back to sleep research after many years. Adenosine is one of the major mediators of sleep homeostasis, the drive for sleep that is not attributable to circadian rhythms. It accumulates while awake to contribute to sleepiness, and blocking its receptors, as caffeine does, promotes wakefulness.

It is true, as stated, that ketogenic diets increase adenosine. There is ample literature on this, much of it from Susan Masino and colleagues, who are especially interested in the role of adenosine in the therapeutic effect of ketogenic diets on epilepsy. See eg, [Mas2009], [Mas2014], [Rus2020]. It's surprising, therefore, that Breus does not address, or even mention the seeming paradox that an intervention that increases adenosine action is not only not associated with increased sleep, but, according to his opening statement, is associated with less.

An approach to this problem that I will explore in upcoming work is to look at the role of cellular energy regulation. Adenosine accumulates from the use of ATP. As ATP is used it leaves AMP (two of the tri phosphates consumed, leaving a mono phosphate). This increases the AMP/ATP ratio. Adenosine can come from the further metabolism of AMP. However, when the AMP/ATP ratio rises, AMPK increases in response. AMPK is associated with wakefulness, and is increased in response to sleep deprivation [Chi2011] (as is ketogenesis and other markers of fat metabolism [Chi2014]). Ketogenic diets greatly increase AMPK, upregulating processes that generate more energy. One could hypothesise that this state of increased energy availabilty permits more wakefulness at a given level of adenosine accumulation. See Scharf 2008 ([Sch2008]) for an extensive review on energy and sleep-wake mechanisms.

The point that weight loss will benefit sleep is misstated; it will definitely decrease your associative risk for some disorders, but I don't know that this has been causally studied. It's certainly plausible.

Although this is one of the best articles on sleep and ketogenic diets I could find, its accuracy was quite variable. The surveys of macronutrient effects were not grounded in relevance and were overconfident in mechanistic attribution. The connection to adenosine was not explained and had it been examined at all it would have had to start with an admission that it, at least superficially, contradicts a thesis of the article. The claim that carbohydrate quality is clearly related to sleep quality accompanied by evidence showing nothing of the sort undermined overall credibility. However, what the article did demonstrate is that further work elucidating the topic is warranted. Stay tuned.

Want to join the discussion?
Feel free to contribute!